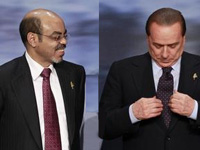 Salini of Italy wins the most important contract ever signed by an Italian firm abroad, valued at 3.35 Billion Euros. Salini has been awarded a project in Ethiopia for the construction of the largest dam on the Blue Nile in the African continent named the Millennium Dam. The project comprises a mega hydroelectric plant, which will produce 15 thousand Giga WH / year of electricity.

The Hydroelectric Millennium Project, developed by the Ethiopian government through the Ethiopian Electric Power Corporation, will produce 5250 MW of electricity and will be operational on September 2014. The hydropower plant will increase the power available to Ethiopia up to 10,000 MW by 2017.

The electric power produced by the Hydroelectric Millennium Project is equivalent to the power produced by six medium sized nuclear power plants. The estimated price of electricity produced by the plant is 5 cents/ KWH, with a total amount of 770 million Euros per year. This figure is very low compared with the price of electricity in Europe, which is around 41 cents/ KWH. If the energy was sold in Europe, the plant cost is amortized over a single year.

The site is located 700 km northwest of Addis Ababa, Blue Nile, in Benshangul/Guma region, which is one of the nine ethnic divisions (kililoch) of Ethiopia. Previously known as Region 6, the region's capital is Asosa. The project involves the construction of a Roller-Compacted Concrete (RCC) Dam with two power units installed at the downstream side of the dam. The power units are positioned on the left and right side of the river and consist of 10 and 5 Francis turbines respectively, with a total production capacity of 5250 MW. The project comprises a spillway and an RCC arch dam 5 km long and 50 m high.

Electricity will be produced through clean technology, without the need for resettlement because the area is not populated. The project will also have positive effects on agriculture in the downstream side.

The work will be carried out using the "Fast Track Implementation" developed by Salini for the construction of large hydroelectric plants. The method is based on simultaneous execution of different phases of construction and allows a drastic reduction - by at least 50 percent - of the time of work execution. The adopted techniques for the construction of the hydroelectric plant is expected to generate a much quicker Return on Investment (ROI) compared to other traditional methods.

The foundation stone was laid on Saturday, April 2 at a ceremony in the presence of Ethiopian Prime Minister Meles Zenawi, the Energy Minister, Alemayehu Tegenu, top executives of the Ethiopian Electric Power Corporation and Peter Salini, the CEO of Salini.