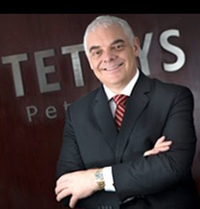 Dr. David Robson and Liz Landles have resigned from the Board of Directors of Tethys Petroleum Limited, with immediate effect.

Dr. David Robson said: "It is with regret that, in the interests of the Company, I feel compelled to step down from the Board of Tethys Petroleum Limited as a director. I have been a director of the Company since its creation in 2003 and, for the last 11 years, I have worked my hardest to build a successful business and I believe that we have a very effective oil and gas exploration and production company working in Central Asia and the Caucasus with some notable firsts and with enormous potential. Our team has a very high reputation in the area both for good exploration success and for our professional approach to business and we are very well respected as a highly competent oil and gas operator. I wish the staff and the Company well for the future and hope that it can further develop its business from the solid and diverse platform we have created."

Rt. Hon Peter Lilley MP, Vice Chairman of the Board commented: "It is difficult to overstate the contribution David Robson has made in building Tethys Petroleum into the company it is today. It is his vision, energy and leadership that have built Tethys into a successful oil and gas exploration and production company. His immense experience of the oil and gas business and tireless enthusiasm have been an inspiration for the Tethys team as it has grown from owning a single stranded gas field in Kazakhstan to being an oil and gas exploration and production company operating in several countries and in Tajikistan the respected partner of two of the largest oil companies in the world. David's leadership has been essential in this growth and he leaves behind a strong business where he will be greatly missed by his friends and colleagues. We all wish him well for the future."

"Liz Landles was one of the founders of Tethys Petroleum and has played a pivotal role in making the Company into what it is today. Her professionalism and dedication have been an inspiration to the Tethys team and she too will be missed by friends and colleagues. We wish her every success in the future."

Tethys is focused on oil and gas exploration and production activities in Central Asia and the Caspian Region. This highly prolific oil and gas area is rapidly developing and Tethys believes that significant potential exists in both exploration and in discovered deposits.