Harold is past chairman of the Oklahoma Independent Petroleum Association and served as a founding board member of the Oklahoma Energy Resources Board. He was President of the National Stripper Well Association and founder and Chairman of Save Domestic Oil, Inc. He recently co-founded the Domestic Energy Producers Alliance to preserve the oil and gas markets for oil and gas produced in the United States. In 2011, he was inducted into the OIPA’s Wildcatters Hall of Honor, the association’s highest recognition. 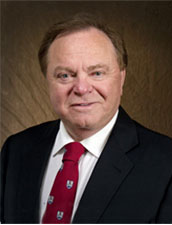