As President & Chief Executive Officer, Brian is responsible for overall leadership of Cenovus Energy’s strategic and operational performance. He is also a Director of Cenovus Energy. Brian joined a predecessor company in 1984 and became a member of the Management Team in 1994. His business experience includes a variety of areas in finance, business development, reserves, strategic planning, evaluations and communications.

Brian earned a Bachelor of Commerce degree, with distinction, from the University of Alberta in 1980, and received his Chartered Accountant designation in 1983. In 1993 he completed the University of Western Ontario's Executive Management program, and in 2010 received the Fellow of the Chartered Accountant (FCA) designation from the Institute of Chartered Accountants of Alberta. Brian is a member of the Canadian Council of Chief Executives and the Canadian Institute of Chartered Accountants (CICA). He is a past Chairman of CICA's Risk Oversight and Governance Board and previously served on CICA's Innovation Council. In April of 2012, Brian completed a two-year term on the Canadian Association of Petroleum Producers (CAPP) Board of Governors. He continues to participate on several CAPP committees including the Oil Sands CEO Council.

Brian was appointed to the Federal Government's Global Commerce Strategy Advisory Panel headed by The Honourable Ed Fast in May 2012. Brian has been active in supporting the community. He became Chair of the Calgary Police Foundation in June 2011. In May 2012, he was named Calgary's first Honourary Deputy Police Chief. 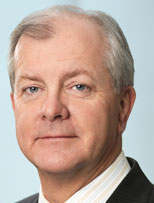